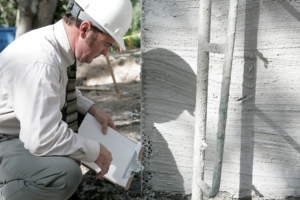 Home Inspection Are Not Pass/Fail

It’s important for clients and agents to understand that a home inspection is not a pass/fail inspection. This is an assessment of the house’s overall health at a particular point in time.
Rather than being concerned with code, we are concerned primarily with safety. If there is a part of a home where its compliance with code is questionable, we may use language such as:
“This is not a recommended practice”
“I Recommend upgrading to current standards“
Why don’t we call out code violations? Well, the answer is simple: We do not have that authority. Even if we are aware of building code, there is a lot of complication surrounding it.

For example, a Concord home inspection on a historic home built in 1901 that has not been updated since 1960 will not have GFCI receptacles installed in the bathroom.
By 2021, GFCI protection has long since been a requirement. However, the house built in 1901 is grandfathered and not required to conform to current codes. The renovations that were done in 1960 will then held to standards of 1960. Heck, in 1960, the GFCI wasn’t invented yet.
However, because it is a safety hazard, it will be called out as such. It was introduced into the code a little over a decade later because people were dying from electrocution in their bathrooms when water and electricity mixed.
The defect in that instance is not that it was code violation. The defect is that it is a safety hazard. Calling a code violation does nothing for a potential buyer of that home. It wasn’t required in 1960. End of story. On the other hand, calling it a safety hazard has a small chance to be beneficial when it comes time to negotiate.

A home inspector in North Carolina is allowed to cite code and inform a client of a code violation. However, if the home inspector is not a qualified code inspector, this can be quite dangerous. It can lead not only to lawsuits, but most importantly to a severely misinformed client. This provision in the North Carolina statutes is a nice way of telling home inspectors to stay in their lane!
Moreover, if an inspector is not certified by the local governing body in code compliance, but still elects to cite code in the report, the inspector runs the risk of not being covered under their errors and omissions insurance. Should a mistake be made and lead to a lawsuit, the insurance company may say that inspector did this at their own risk. The reason being the inspector went well outside the standards of practice and an insurance company covers an inspector largely based on the standards of practice in their particular jurisdiction.
Just remember – a house cannot fail a home inspection. Home inspectors in North Carolina are allowed to cite code under very specific restrictions, but cannot enforce code. Although most home inspectors will not quote code in their reports, inspectors will use their knowledge of current and previous code to inform their inspection and communication as a means to keep you safe and properly informed.
August 17, 2021/by wilson
https://dqybj0sgltn1w.cloudfront.net/wp-content/uploads/sites/242/2021/08/11142918/commercial-building-inspection-building-code-scaled-1.jpeg 1707 2560 wilson https://dqybj0sgltn1w.cloudfront.net/wp-content/uploads/sites/242/2021/06/10132655/wilson-and-sons-inspection-and-testing-dark.png wilson2021-08-17 07:00:432022-09-19 17:53:42Home Inspections and Code Compliance
Scroll to top